How Did Katie Bakes for Casey Begin? Our Story 💙 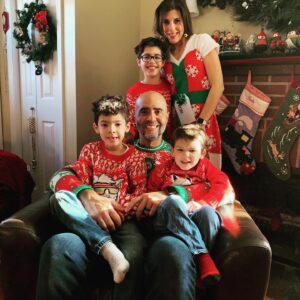 Over 20 years ago I was in college studying to be a high school history teacher.  All was well except I couldn’t get the bug out of my head for wanting to just go and see what the program at the French Culinary Institute for Professional Baking and Pastry looked like.  Welp, that was it…I was sold the minute I walked through the door and started class three months later and have been lucky (or crazy!) to work in the hospitality industry ever since.  I grew up in a very traditional Italian home where food and family are our joy and heartbeat. My Nonna lived with us growing up and I cooked and baked with her and my mom nearly every day.  I outgrew a dairy allergy and being FPIES to wheat as a child but have always avoided both as much as possible because they are massive triggers in my body. It was difficult as a pastry chef and especially when I became an instructor because I had to taste eeeeverything my students would make for their practical exams.  But, you always do what you love!

Casey is our third and youngest boy.  He was born healthy as a horse a week early.  A week later he was acting a bit strange at night.  I watched him closely because we all had a cold in the house.  By the next afternoon he was exhibiting behavior that to me looked like seizures.  At 7 that evening his temperature went from 99 to over 101 in an hour. We flew to the ER.

Fast forward to the following day when 5 doctors came to his room in the PICU to tell us that he has a rare form of viral meningitis and they did not know if he would survive and what the lasting damage from the virus and his seizures would be.  It was a devastating week in the ICU but we were so grateful to bring him home. He started OT, PT and speech at 4 weeks old and has been a fighter to get strong ever since.

So, where do the allergies come in?  We have a family predisposition to food allergies, but nothing prepared us for what was to come.  My older boys outgrew a milk allergy by a year, so I wasn’t surprised when Casey started showing signs at around 3-4 weeks with eczema and bad diapers.  I cleaned my diet out and continued to nurse. Around 4 months things really started to get bad and I was on a very strict diet plus he needed reflux medication.  He could barely sleep because his reflux was so bad, and he had to wear a helmet 22 hours a day for plagiocephaly. At 6 months he had his first allergy testing and showed positive to quite a few things via blood and skin testing. The allergist wouldn’t prescribe him an epinephrine injector because she felt it was a false positive because he was so young and nursing.  After I kept insisting, she did prescribe however, when I asked how and when to use it, she told me, “There are videos on YouTube.” Uh, no. On to another allergist.

The next one was very nice but still a little too blasé about Casey’s results.  I didn’t feel comfortable when he was told he’s showing positive to almonds but try a challenge at home to Honey Nut Cheerios.  My gut was screaming to find another allergist and I did, quickly.

I saw him and immediately felt at ease and he reassured me that yes, he was highly allergic to many things and I should never be without 2 auto injectors at any time.  He gave me his cell phone to call any time of day, showed me the how to use the injectors and what to look for. That was on Thursday, October 19, 2017. His first bi-phasic anaphylactic reaction was four days later on Monday, October 23, 9 days before his first birthday.  His second bi-phasic anaphylaxis was three weeks later on Friday, November 17. More would follow, including FPIES (Food Protein Induced Enterocolitis) reactions that required Epi and overnight hospitalizations and dozens of random hives and mystery reactions. He is monitored for EoE being right on the borderline after having an endoscopy. 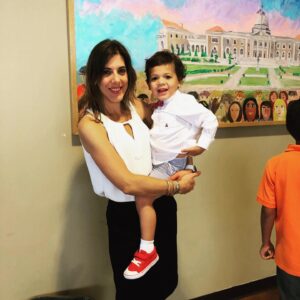 Currently Casey is allergic to wheat, soy, unbaked milk and egg, tree nuts, all seeds, all beans, all legumes, rye, barley and other gluten containing grains, avocado, tropical fruit and pumpkin and has reactions to lamb and turkey.  He is cleared to try fish and shellfish but he will not try any except Ian’s fish sticks. He has FPIES to beef and pork and has OAS (Oral Allergy Syndrome) to melons. There are times when Casey will try a new food and tell me it tastes spicy or say “it’s not safe for me” which leads me to believe his body is telling him something is not right.  Gratefully, he has had food challenges and passed for peanut, oat (it was a big FPIES trigger at one point), coconut, rice, cod, potato, baked egg and most recently baked milk. Gaining those items back was absolutely monumental, each and every one.

With all these restrictions I had to find things for him because nearly everything store bought was unsafe.  I was lucky enough to have my background as a pastry chef and I needed to make lemonade out of lemons FAST. I began experimenting with all my recipes and some really good things happened!  But let me tell you, it is quite humbling after doing something as a career for over 20 years and failing as you try each new thing. Baking is science, and each ingredient serves a purpose.  When the basics are taken out, reconstructing is very difficult. As more things were allowed back in his diet more freedom and options opened up, but I still stick with some great alternative ingredients I had grown used to using, like cassava flour and egg replacer.

I hope that these recipes, baking or savory, and blog posts with our experiences can be helpful and enjoyed by your families.  I try to have options for a lot of the recipes, whether it be vegan for those egg and dairy free, or with a nut butter replacement because we all have different allergies to manage.  Baking has always been my therapy and stress reliever as well as a major source of joy and I hope I can give some of that back to you.

As we all know, reading labels and preparing food when managing allergies is a job within itself with much responsibility. All the brands I use are ones that I have contacted, and Casey has eaten safely. That being said, I must remind…

Please do your own research when deciding which products and foods are safe for the allergies you manage. These are the ones that are safe for our needs but may not be for you. Everyone has different comfort levels with manufacturing and production procedures.

And, as a friendly reminder, always have 2 epinephrine auto injectors on hand!

We use cookies on our website to give you the most relevant experience by remembering your preferences and repeat visits. By clicking “Accept All”, you consent to the use of ALL the cookies. However, you may visit "Cookie Settings" to provide a controlled consent.
Cookie SettingsAccept All
Manage consent

This website uses cookies to improve your experience while you navigate through the website. Out of these cookies, the cookies that are categorized as necessary are stored on your browser as they are essential for the working of basic functionalities of the website. We also use third-party cookies that help us analyze and understand how you use this website. These cookies will be stored in your browser only with your consent. You also have the option to opt-out of these cookies. But opting out of some of these cookies may have an effect on your browsing experience.
Necessary Always Enabled
Necessary cookies are absolutely essential for the website to function properly. This category only includes cookies that ensures basic functionalities and security features of the website. These cookies do not store any personal information.
Non-necessary
Any cookies that may not be particularly necessary for the website to function and is used specifically to collect user personal data via analytics, ads, other embedded contents are termed as non-necessary cookies. It is mandatory to procure user consent prior to running these cookies on your website.
SAVE & ACCEPT